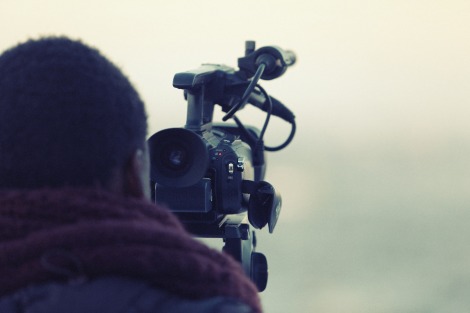 Over cigarettes and tea in a cafe at the French Cultural Center (CCF) in Central Jakarta, Dimas Jayasrana talked of his effort in putting together a directory of Indonesia’s alternative film communities, how they began to mushroom in the late 90s, why most of them have died, and what he has tried to do to revive them.

Born 27 years ago in Jakarta, Dimas received no formal education as a filmmaker. “It may sound clichéd, but like most people, movies have fascinated me since I was a little kid,” said Dimas, who has produced 19 films and videos. Dimas believes that films are the most powerful medium for conveying ideas. “Our ability to comprehend and to learn about anything is amplified through films,” he said.

When he was still a university student, Dimas was politically active on campus, and in the year 2000, he got to thinking about how to best convey his chosen political message.

With basic knowledge—mostly obtained through the internet—and a borrowed camera, he produced a simple documentary about Indonesia’s current political climate through the eyes of ordinary people.

After filming, Dimas realized he had forgotten one important thing: who was going to assemble the separate takes into a coherent film. He could not do it and nobody else in the small town of Purwokerto, Central Java, where he lived, could either.

However, by means of a mailing list, Dimas found out about film communities in a nearby city, Yogyakarta, allowing him to find assistance. “I became friends with a filmmaker from Yogyakarta who was willing to do it. All he asked in return was simply for me to make sure the film got an audience.” And it did. Around 600 people came to the screening, marking Dimas’ first big leap into the indie film scene.

It quickly dawned on Dimas that good networking had been essential to the documentary’s success. “I was very lucky to meet a person with such a good heart,” he said, recalling the editor. “So I thought, what about other independent filmmakers? They must have difficulties as well. What if they have no idea where to look?” The questions propelled him into action. He decided to put together a directory of Indonesia’s alternative film communities, which has become known as the “pocketbook”.

It took him four or five months to come up with the concept, while the compilation process was very simple. “I repeatedly announced my plan for the pocketbook on the mailing list, asking film communities to participate by filling in the names of their communities, addresses and contact persons in an e-mail form. Seventy-two communities responded,” Dimas said.

After sorting through the data, working on the layout and printing, which he did all by himself, he managed to get copies of the pocketbook distributed in 2003, helping alternative film communities build a cooperative network. “One community might be lacking in facilities that others could complement. With the directory, it is easier for them to support each other,” he said.

The years 1999 to 2004 were probably the golden era of Indonesia’s alternative film industry, indicated by the number of short films produced by the proliferating alternative film communities or clubs. In 2003, when a private television station organized a short film festival, 740 works were submitted, which grew to around 800 the next year. Still, during the era, there were other national alternative film festivals, such as Festival Film Video Independen Indonesia (later called Festival Film Pendek Konfiden) and OK. Video: Jakarta International Video Art Festival. “At that point, we should’ve seen that alternative short films were the answer to our questions regarding how we could develop Indonesia’s film industry.”

However, after 2004, the country’s independent film industry appeared to have lost much of its sparkle. Dimas took the hint when he updated the directory. Using the same procedure, from the 72 film communities, only 10 responded. “I think it resulted from several circumstances. There was almost no appreciation or criticism of alternative films. There were very few channels through which the films could be distributed; as a matter of fact, the screenings and distribution were always done sporadically. Plus, you can’t really count on alternative filmmaking as your source of income,” Dimas said.

Those circumstances apparently did not hold Dimas back from the alternative film scene. To create a space for appreciation and criticism, help promote local and national film festivals, as well as encourage indie filmmakers to keep enriching their knowledge, Dimas once again turned to the internet. “I signed up for a web-blog, asked film communities to update their own data, and wrote and collected articles that indie filmmakers could use and share,” Dimas said.

This year, Dimas finally created a website dedicated to the development of Indonesia’s alternative film communities. “I don’t care about blockbuster movies, so I don’t want any of them on the website. What I want is for film communities to keep experimenting, finding ways to distribute their works, and learning to become pros.”

Dimas is now working as a film programmer at the CCF with the understanding that it is going to take a long time before Indonesia’s alternative filmmakers can actually become professionals. From regular updates, the 10 film communities that he identified at one point multiplied into 41. He pointed out, however, that only less than 10 are really active today.

“There are just so many layers to take care of, from government policy to the mentalities of our filmmakers,” he said. Nevertheless, Dimas is determined to keep up the momentum, knowing that he is not the only one who cares.