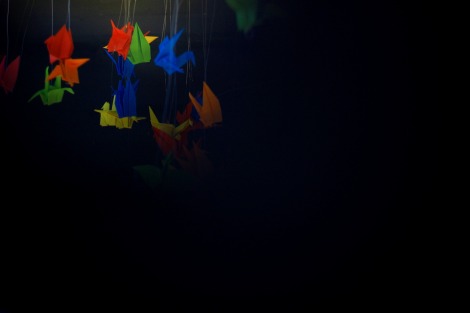 Having been away for a week for Idul Fitri, Diah Tyas, 21, returned to the small village of Caben, Bantul, Yogyakarta, to see how Omah Bambu Children’s Space was faring during its renovation.

There was not a single builder in sight. Bamboo rods were still standing on a concrete slab; the walls and roof tiles were yet to be placed. The house was once a center where local children aged 4-12 had gathered to express their creativity, and it will be again soon.

“It wasn’t badly damaged during the earthquake, but we were having a termite problem. The renovation work was scheduled for completion in three to four weeks, but everything slows down in the holiday period,” said Diah with a thick Javanese accent.

Around Caben, little boys were spotted playing in groups outside their houses, most of which have now been renovated, one year and five months after the earthquake that shook Bantul and the neighborhoods that surround it. Caben was one of the most seriously affected subdistricts, with 68 casualties and 95 percent of its houses left uninhabitable.

Taking part in an emergency aid group, Diah first came to Caben a few weeks after the disaster. “While handing out food, we saw little kids roaming the streets begging for money. My friends and I agreed that we had to do something for them, and came back with a program called Tenda Ceria (Cheerful Tent),” she said. The program attracted a growing number of children. “There were as many as 40. We sang together, made drawings, played games, shared stories. We came up with a lot of fun activities to help the children recover from trauma.”

Diah spent enough time with the children to observe the trauma had manifested in different ways: anxiety, anger, guilt, numbness. She recalls one girl who would scream unexpectedly from time to time and a little boy who was in such emotional distress that he would beat her up with his fists.

The Cheerful Tent program ran for three days in Caben before moving to other areas. Diah, however, was drawn to visit the village almost every week.

“Her perky and friendly behavior made her Caben’s sweetheart in no time,” said Mas Gareng, one of the villagers. “Many of us here suggested that a children’s center be established. For the parents, not having to worry about where their children were while they were trying to rebuild the lives of every family member sounded like a terrific idea,” he said.

The community’s request was answered in December 2006 when Omah Bambu Children’s Space was set up. The name Omah Bambu, which literally means Bamboo House, has its own story. “We wanted to use the same site as Happy Tent, but the owner was ready to renovate. We were then offered the use of another vacant lot, but were later informed that it was going to be occupied.”

Diah wandered aimlessly around the village, hoping an idea would come to her.

“I still believe what happened to me was a miracle. I just walked on and on until I stopped in front of a house. There I saw the owner, Pak Sutartono, who hardly ever came to check on the house since he had moved to Jakarta, but was there that very day. I talked to him—told him about the children’s space plan and how this house would be perfect—and he agreed to let me use it at once. Because the walls of the house were made of plaited bamboo strips, my friends and I decided to call the place Omah Bambu,” said Diah, adding that the bamboo element would still be present after the renovation.

Omah Bambu is run on the principle that children’s creative potential should be freed. The children choose for themselves how they spend their time at the center. There are books to read, gamelan instruments to play and craft and gardening tools to wield. Sometimes the children engage in parallel play, and at other times they spontaneously do the same activity together, such as placing plants in pots or setting up a simple badminton court. On one occasion, they even collaborated to make a simple film.

“Caben is divided into six blocks. The great thing about Omah Bambu is that it brings the kids from all six blocks together. That didn’t happen very often before,” said Mas Gareng.

“One of the reasons why I want this program to continue is because I believe in a system of learning that allows the children to do and be what they want,” said Diah, “unlike at school where the students do as they are told. What children need is direction, not orders.”

But to continue means securing a constant supply of equipment and funding. Dyah Ekarini, a friend who lives in Jakarta, connected Diah with people who were willing to provide support. Dyah trusts Diah as “a person who cannot handle sitting behind a desk, looking for profit”.

In order to keep the space going, Diah used some of the money she received to set up two catfish ponds. “Some of the people here have agreed to look after them. Later, after we sell the fish, a portion of the money will go to Omah Bambu, while the rest is for the keepers.” Catfish are in high demand nowadays, and Diah’s initiative has inspired one of the locals to build his own catfish pond, with others ready to follow the cue.

There were initially 15 volunteers at Omah Bambu, but today only Diah remains active, although she admitted that more volunteers would be of great help. “I always come with a friend, though. Not only because I want my friends to help out here, but also because I don’t have any transport,” she said with a big laugh. Diah later confessed that the one-hour ride from her place in Klebengan, Sleman, to the remote area had been a “time management obstacle”, not to mention that she is still a student of Sanata Dharma’s School of Psychology.

Asked about her hopes for the place, Diah replied, “I want to see Omah Bambu remain neutral. Kids from any ethnic or religious background can come to learn and to play, and bring the experience they’ve got here with them once they’ve grown into bright and successful adults.”